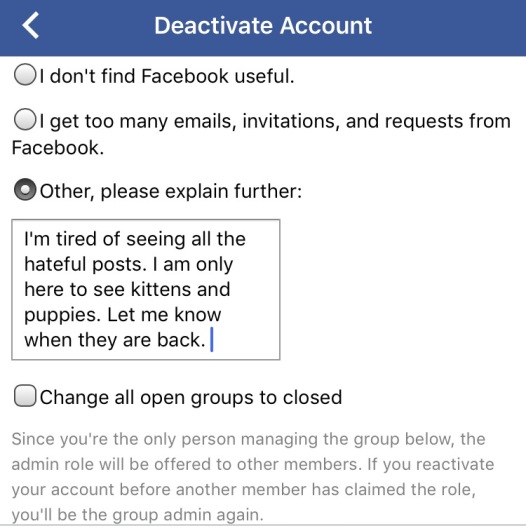 Earlier this week, I found myself getting very aggravated with many of the posts I was seeing on Facebook. I couldn’t help but look and was so surprised to see how many of my “friends” have such different views than my own. Normally, I embrace diversity; but, after the tragic shooting in Orlando, I was not in the mood. Facebook should be for posting vacation pictures and making one’s life look 10 times better than the barely bearable shit show that actually exists. Instead, what it had become had me wanting to throw my phone in the toilet.

I deactivated my account. As far as how long this will last goes, I cannot say. What I can say is that I have attempted to open the app on my iPhone a ridiculous amount of times — completely out of habit. The habit is what I am taking a necessary break from. And the opinions. I’m tired of reading opinions. I’d rather see pictures of everyone’s annoying children any day than have to expose myself to another second of their opinions.

Instagram will be my stand-in. At least there is more purity there. As stated, I could be back on the FB train tomorrow, but the trial separation feels nice today. Hopefully, when and if I do activate my account again, there will be less of the smug and more of the pug (I’m a big fan of all the pet pictures). If not, I foresee an on-again off-again sort of relationship forming.

That’s all for now. Gotta go and figure out how in the world to use Snapchat! 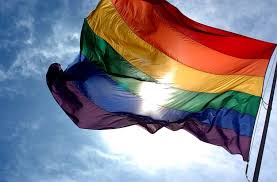 Poetry, short essays and other work showcased by a Scientist, Philosopher, and Adventurer. Posts on Monday and First Fridays.

The Art and Craft of Blogging

The latest news on WordPress.com and the WordPress community.